Respiratory syncytial (sin-SISH-uhl) virus, or RSV, is a common respiratory virus that usually causes mild, cold-like symptoms. Most people recover in a week or two, but RSV can be serious, especially for infants and older adults. RSV is the most common cause of bronchiolitis (inflammation of the small airways in the lung) and pneumonia (infection of the lungs) in children younger than 1 year of age in the United States.

People infected with RSV usually show symptoms within 4 to 6 days after getting infected. Symptoms of RSV infection usually include

These symptoms usually appear in stages and not all at once. In very young infants with RSV, the only symptoms may be irritability, decreased activity, and breathing difficulties.

Almost all children will have had an RSV infection by their second birthday.

Most RSV infections go away on their own in a week or two.

There is no specific treatment for RSV infection, though researchers are working to develop vaccines and antivirals (medicines that fight viruses).

RSV can spread when

There are steps you can take to help prevent the spread of RSV. Specifically, if you have cold-like symptoms you should

Ideally, people with cold-like symptoms should not interact with children at high risk for severe RSV disease, including premature infants, children younger than 2 years of age with chronic lung or heart conditions, children with weakened immune systems, or children with neuromuscular disorders. If this is not possible, they should carefully follow the prevention steps mentioned above and wash their hands before interacting with such children. They should also refrain from kissing high-risk children while they have cold-like symptoms. 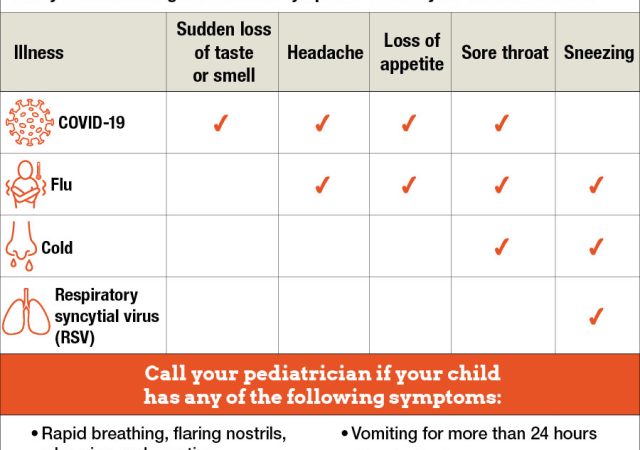 Respiratory Illnesses Comparison Chart – Which is it?